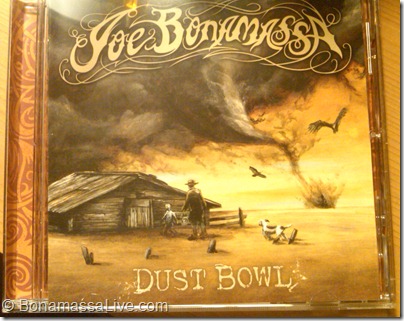 Pictured above is my copy of Joe Bonamassa’s new album, Dust Bowl. The album came in the mail today and made by day to say the least. I’m honored to receive it in advance, so that I can share it with all of you. Excuse the picture quality, it was taken with my Blackberry! Let’s start off by going song by song.

The first song we hear on the album is Slow Train. This tune was performed live in the fall 2010 tour. The song sounds exactly like it did live, just amazing. The intro of the song builds up to an amazing guitar solo. Dust Bowl then comes rolling in. Dust Bowl does not disappoint as being the title of track of the album. Joe is always willing to surprise us with new guitar riffs and techniques, the opening of this song is a clear example of that. Joe’s voice proves to be strong on this one. After Dust Bowl, we roll into the tune that features John Hiatt. Tennessee Plates is one of John Hiatt’s original tunes that Joe covers. Joe’s vocals sound great on the song, he opens the song. He switches verses with John Hiatt. Great Duet and Joe plays guitar along Vince Gill. Chad Cromwell also plays drums on this track. 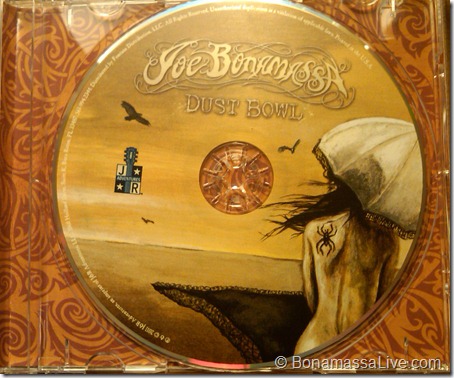 Up next is a song titled “The Meaning of the Blues”. This could very well be the “bluest” song on the whole CD. Hearing this song bring me back to the Blues Deluxe and You & Me era. The song opens a bit slow, with some great singing and breaks into a crazy guitar solo. You thought Joe played fast before?!? Wait till you hear this one, folks. It will just make your head spin in circles. We then go into a song titled “Black Lung Heartache”. This song to me, brings back memories of “The River”. We have a song that has a nice intro, with the opening verses and next thing you know, you’re listening to some powerful electric guitar playing, that has a great British sound to it. Up next is “You Better Watch Yourself”. This is another great fast paced blues song. Would be great to see live, it’s that type of song! The Last Matador Of Bayonne is a slower song, also blues orientated.  We get to hear some of Joe’s great slow guitar playing, where you can literally hear one note at a time, just amazing! Tony Cedras plays the trumpet on this song. 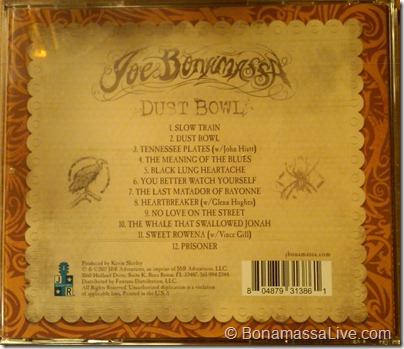 We’ve know that Joe has been a long time fan of Paul Rodgers. He shows us again on this cd, by covering the song “Heartbreaker”. Joe is singing on this song with band mate Glenn Hughes (Black Country Communion). This is a great classic rock song, it would fit in perfectly on the setlist at a Black Country Communion gig. I hope it is played live. Sirens open our next song, “No Love On The Street”, which was originally down by Tim Curry. Once the sirens cut out, Joe’s gives us a great guitar riff, which goes into the first verse. Not really a blues song in my opinion, Joe’s voice sounds great though. You’ll also hear Beth Hart and Blondie Chaplin on guitar. “The Whale That Swallowed Jonah” is a very upbeat song and that is exactly how it starts off. Joe’s guitar playing on this track is enough to make one drool, literally. His voice also shines out on this song. This might be my favorite Joe Bonamassa original on the whole album. This song is a fine example of how Joe can steer us in different music directions. Great Rock tune. Vince Gill appears on “Sweet Rowena” with Joe. Vince Gill takes the lead vocals on this track, with Joe doing backup vocals. The two of them sound great together. Vince Gill is a great guitar player too. Finally, the last track on the album is “Prisoner”. This track is mainly a vocal powered track, which sounds great. His voice just  continues to get better and better, which is made very clear by this album.

Overall, how could you not want this CD. It’s Joe Bonamassa’s best album to date, in my opinion. The combination of Kevin Shirley and Joe Bonamassa is just amazing, they push each other in new directions with every recording. Kevin has the skill of really catching Joe at his best. The whole disc sounds great. Not to mention, the featured guest appearances by John Hiatt, Vince Gill, Glenn Hughes, Chad Cromwell, Beth Hart, Michael Rhodes, Peter Van Weelden, Tony Cedras, Blondie Chaplin, Arlan Schierbaum, Reese Wynans, and Steve Nathan to top it off. Bottom line is that Joe continues to get  better and better. Joe is the best of the best, when it comes to guitar playing. A guitar player’s favorite. Pre-order the CD today, if you haven’t already. I can guarantee that you will not be disappointed.