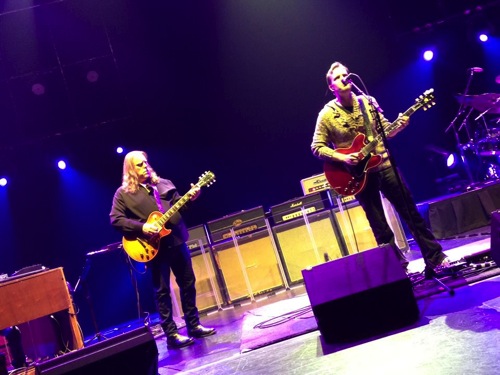 What a great night in New York City. Spring is here, the weather is warm. And Joe Bonamassa, one of the best guitar players in the world is about to take the stage for a three night run, at New York’s famous Beacon Theater. The Beacon, which Joe has played twice previously, is home to one of his live recordings. Tonight, however, marks another milestone in Joe’s career as he invited friend and special guest Warren Haynes (Allman Brothers, Go’vt Mule) to the stage to play several songs. Together Joe and Warren started off with a great cover of Crossroads, which then went into one of the songs from Joe’s first studio album, A New Day Yesterday. Warren did a spectacular job on the lead vocals for If Heartaches Were Nickels. To top the night off, the duo played Look Over Yonder’s Wall. An absolute stellar, I mean stellar performance by Joe and Warren. Joe also played great throughout the night in his normal set, which included several of my favorites The Ballad of John Henry and Just Got Paid. Two nights remain at the Beacon Theater and quite frankly, I can’t wait to see what they have in store.

4 thoughts on “Haynes and Bonamassa Amaze Crowd at Beacon Theater”