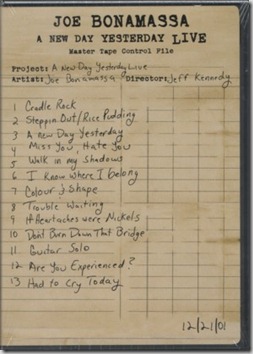 Yesterday marked the 10th anniversary of Joe’s first live DVD shoot, A New Day Yesterday Live. The DVD was shot on December 21, 2001 at Piere’s in Fort Wayne, Indiana. A lot has changed since then, this was Joe’s only show where he played with women dancing on stage. He’s  moved on from the bar scene, he no longer drives around in an astro van and trailer. Even though Joe did not have a big production team like he does now back then, Joe’s sound was still dead on. Some of you who have been Joe fans for years will agree. It was not rare to see Joe standing behind the soundboard mixing the sound to just the way he likes it. Hope everyone has a great holiday season and I know I’m looking forward to the next ten years of Joe’s career!