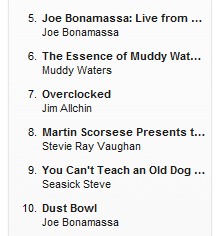 Almost two years after the release of Royal Albert Hall in iTunes, it is still hanging in the top 10. Joe’s RAH album comes with 19 tracks, most are exclusive to the album. The album in it’s entirety must be purchased to get all of the tracks. We are just shy of seeing 200 five star reviews for this album.

Joe’s other album in the top 10 is Dust Bowl. The album in iTunes has over 200 reviews, with 4.5 being the average rating. Dust Bowl has been in the top 10 since its release in March 2011.

These two albums are pretty impressive. Not to mention, the feedback behind each album on iTunes is great. I don’t think everyone will buy music from iTunes. I know for a fact that there are a lot of people like myself who like to have a physical copy of the album to give to others or even to get signed.

None the less, these numbers are a good indication. iTunes is the best selling digital music store on the internet. To have Joe be on iTunes is great and to have him be in the top 10 of blues is even better. It will only continue to grow and get better from this point forward. Rock on..

One thought on “Two Albums In iTunes Top 10 Blues”